LEGIONNAIRE OF THE YEAR 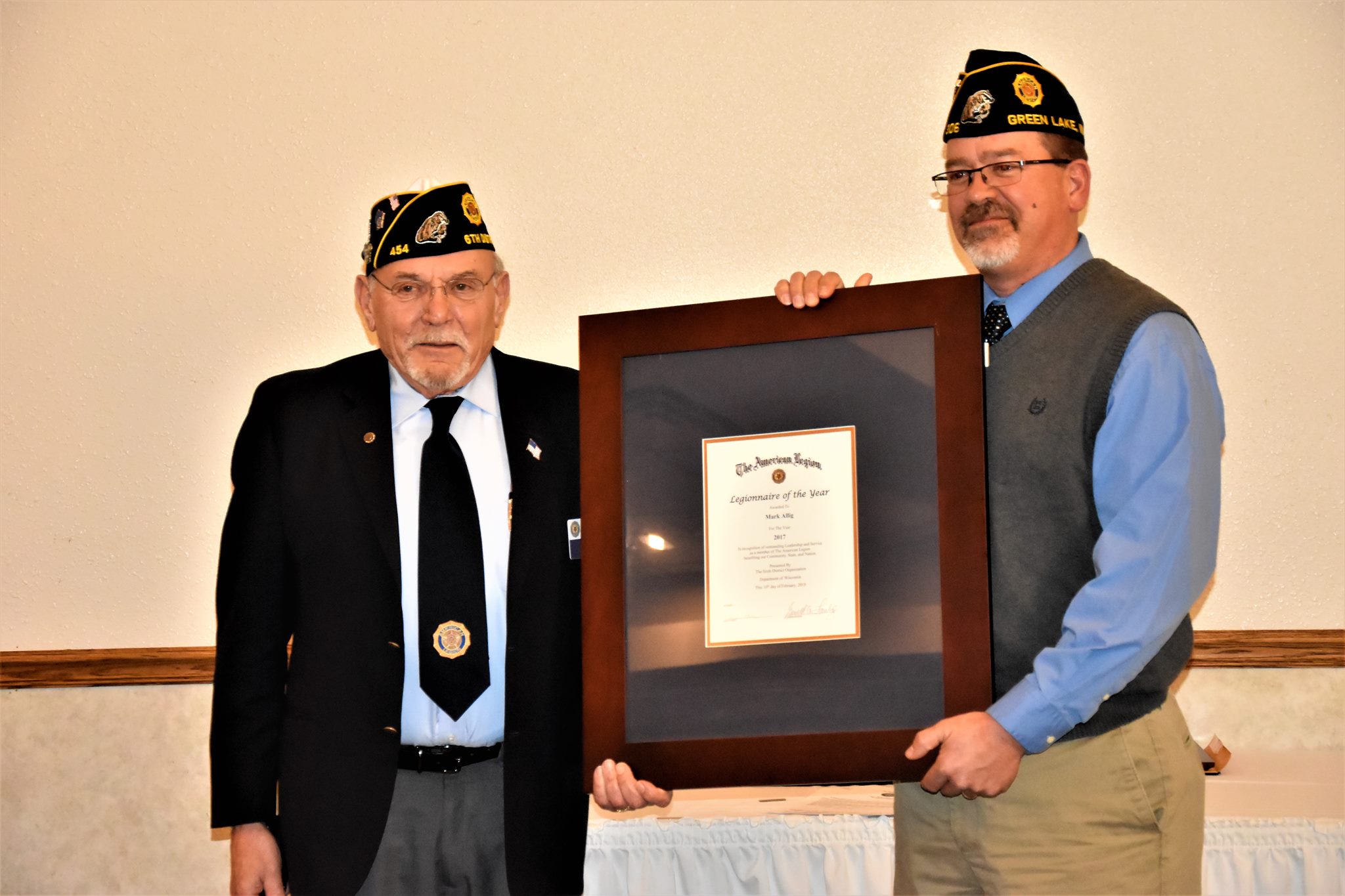 Ripon’s Mark Alling was named Legionnaire of the Year for American Legion Post 306 and for Wisconsin’s Sixth District on Saturday, February 10. Posts throughout Wisconsin’s sixth district, which comprises six counties, are asked to nominate a member who has been outstanding in promoting the American Legion, performing community service activities and participating in patriotic activities. Nominations were judged by Vice Commanders at the Department of Wisconsin Midwinter Conference. All nominees were invited to the Americanism banquet on February 10, at which time the district winner was announced.

Mark Alling served American Legion Post 306 members for many years as Sergeant-at-Arms where he was the commander of the details for parades, funeral services and helped provide Color Guards for civic events and organizations. He also scheduled volunteers for all Post fundraising and outreach efforts. Mark attended the Department Midwinter Conference and participated in the M1 Garand workshop. Upon returning, he invited the workshop leader to come to our area so that members from all American Legion Posts in Green Lake County could learn about the care and maintenance of the rifles used for parades and military salutes. He also arranged Color Guard and Honor Guard training for members of Post 306.

Mark is presently serving his third term as Post Adjutant. He is actively involved in obtaining 100% membership for the Post each year. He helps with the flag ceremony for new counselors and traffic control for Badger Boys State on both opening and closing dates. He also served on several committees from concept to completion in the replacement of the Post building.

Mark and his wife attend auctions and estate sales on the weekends, then prepare, photograph and offer the items for sale on eBay, packaging them for shipment when they sell – either before going to work or when returning from his 70-hour-per-week job driving a truck. He volunteers more than 20 hours each week to this effort. Profits from eBay sales, which have been donated to the Post’s building fund, have exceeded $73,500 in three years.

Mark is a member of Ripon Community Church where he is a greeter for worship services. On a regular basis, he helps call BINGO at Town Square Community Center, which supports many non-profit organizations in Green Lake’s former municipal building. Mark was an instrumental part of a statewide Kiwanis effort to raise more than $300,000 to award iPads to children on the autism spectrum. When the program was most active, he regularly met Kiwanis members in the Milwaukee area to give them the iPads their Kiwanis clubs were awarding to local children. Mark has helped train the local scout troop about flag etiquette and the proper flag retirement procedures. When time permits he supports the American Legion Baseball team by attending games and selling concessions. Mark has also helped Post 306 in providing items for packages being sent to deployed troops. He can be depended on to help whenever he is available.

Mark Alling earned his membership in the American Legion through his service in the U.S. Navy during Lebanon and Grenada. His watchful eye and attention to detail keeps Post 306 on task in all aspects of the mission of the American Legion. Mark is always willing to help others with their duties if needed. It is with extreme pride that American Legion Post 306 announces Mark Alling as the recipient of the Sixth District Legionnaire of the Year award.